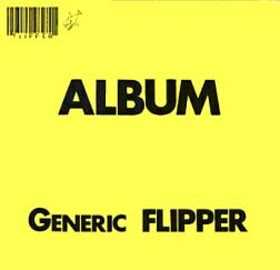 (Request)
Often lumped in with the hardcore bands of the day, Flipper floundered (pardon the pun) in obscurity for over a decade with tons of critical praise but little commercial success. Part of what makes this band so good is their complete disregard for the typical rules and restraints of musical composition. Flipper prided itself on just how ugly their sludgy and nihilistic approach to music was. While their peers were churning out fast paced two and half minute hardcore tunes, a typical Flipper song would hiss with noise and feedback over a bass line for 10 minutes while singer Will Shatter moaned like Iggy Pop being crushed by a boulder. The long out of print Generic is an essential download, if only to hear the album's catchy (in a homicidal bar band sort of way) closer, Sex Bomb. I've also included a download of an unreleased 1982 studio session from the band.

I know, I'm far too late - but could you PLEAZE! reup the unreleased stuff - I'm such a sucker for Flipper, I think in the meantime I got all their stuff on Vinyl - but this sliped (obviously) under my radar -

Thanks, may I can return the favour with some very obscure Noise-Rock - ever heard of a band called F/i? I think you would love it ...