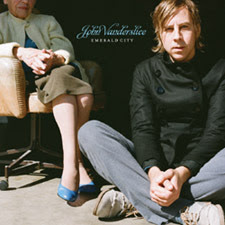 I know a certain reader of this blog will be very excited to see this post. Fans of John Vanderslice will be very pleased with this latest release. He's a talented singer/songwriter and incredibly small man, capable of grasping the attention of any willing listener. Worth a listen.

"John wrote the bulk of his new album, emerald city (out July 24), while knee-deep in legal limbo after a visa application for his girlfriend, a French national he met in Paris, was rejected by US Immigration. The songs and themes are fueled by an era of deep insecurity and paranoia; they develop in front of a backdrop of ritualized and mythologized current events. Lyrically, JV's characters and storytellers track Manifest Destiny from burning wagon wheels to two-bedroom homes with full amenities in Bakersfield, California. Along that rough road, there are bewildered commemorations, peace-lovers and revenge-lusters, psychotic reactions to unnamed episodes, and the grief-stricken and the vengeance-hungry wrapped up in the same skin. Weaving throughout the entire album is the ever present danger of opposition. But at its simplest, emerald city is made up of JV's love songs — confused and angry, afraid and defeated. The red tape tie-up for JV and his girl remains unresolved." Barsuk Records

THIS is why I'm marrying you.

And yes, he is the smallest man I've ever hugged.