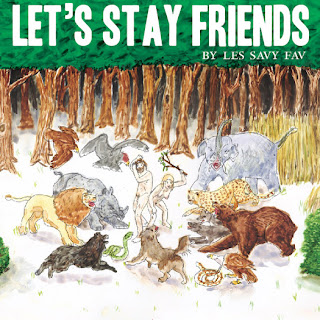 (LINK REMOVED 8/22/07)
Let's Stay Friends is probably my least favorite Les Savy Fav record based on the couple of listens that I've given it so far. Still, Les Savy Fav's worst record is still better than the vast majority of music that has been released this year. The band doesn't seem to be breaking much new ground, sticking to their tried and true groove heavy art-punk style. I guess if ain't broke, don't fix it, right?

Buddy, you are thopughtless! You bag on my record and then you offer the whole thing for free. I'm at my job busting ass to make enough money to pay my rent and to save up to take some time off to make music for the world. The band makes us little if any money and you are taking even that away. and releasing it before we intend. and without the proper art. Really person- this is not very nice to me or my band or indi musicians anywhere
-Tim Harrington tim@lessavyfav.com

No bagging Tim, its an enjoyable record and I love your band its just not my favorite release of yours thats all. I'll take the record down, but just know that we're not out to do any harm. We expect the readers of this blog to do the ethical thing and purchase the albums they enjoy and we encourage them to attend shows as well. As I said before I'll take the album down, no hard feelings I hope.