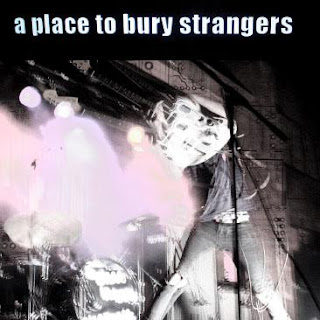 Shoegaze of the late 80s and early 90s is back with a vengeance. A Place to Bury Strangers are the self-proclaimed loudest band in New York, and I doubt there is anyone out there who would dispute their claim. The band's frontman custom builds his own "Supersonic Fuzz Gun", "Interstellar Overdriver", and "Total Sonic Annihilation" pedals which are used by bands such as Lightning Bolt, Wilco, and TV on the Radio. What makes the band so great is that they aren't loud for the sake of being loud. Underneath the layers of reverberated sound is some incredibly catchy tunes. Their self-titled debut is one of the best, if not THE best release of 2007, and an essential addition to my record collection.

thank you so much for this album. i've been looking all over for it and it's been tough considering it's in such limited realese. this made my day.
lucas

Thanks, I downloaded this here and then went to see them live in Detroit based on hearing them first. Then I bought a shirt. Who says file sharing is killing music?