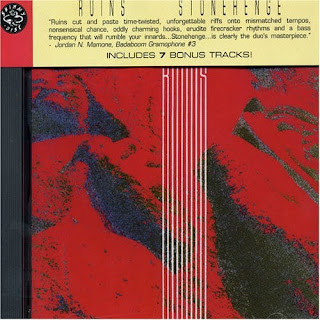 As far as I know, this 1990 release from Ruins is the oldest that can be found on the internet, and this is actually the 1999 rerelease of the album which includes 7 additional tracks recorded in 1988, which all rule. Quite a few tracks found on their singles compilation are taken from this very album. This is my favorite release of theirs that I've heard, although I would kill to hear more of their tracks from their earliest EPs. Progressive, aggressive, and unusually catchy.

Many thanks for this upload man, it rocks. As well for the other Ruins and Boris ones.
Keep on sharing!

Huge thanks for the upload. Having been scouring the web for this album, but its rare and is now demanding huge figures [well, for me they are huge]. Have been blown away by Ruins since first hearing them.

You made my day!

been looking for old Ruins stuff, thanks for uploading this.

Thanks for providing such great tunes. I've just recently discovered these guys and I'm looking forward to listening to this album.

That's definitely not the oldest record by Ruins. You can quite simply find around the internet their EP called Ruins II

NOTES:
produced by RUINS. recorded at TELECOM studio in spring, 1987.

The bonus tracks are from Ruins' debut full-length entitled "Ruins III", which was reissued in the '90s as "Infect" containing both the original recordings and an alternate mix by Ruins drummer Tatsuya Yoshida. The album contains 12 songs and shows up sometimes on Soulseek. There's also a CD called "II & 19 Numbers" which contains the EPs released prior to the album as well as bonus tracks, AND another CD entitled "Early Works" which collects assorted rarities from the same pre-Stonehenge era. They also show up on Soulseek now and again. All great stuff, highly recommended.

Thanks. I'm a great fan of sophisticated HC such as NoMeansNo, Fugazzi and so on.

You can re-upload this album? thanks.

please can you re-up more ruins! i can't find any of their stuff anywhere!