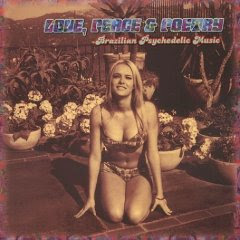 A few months back I posted a really cool Japanese psyche comp from this same series. With the complete lack of anything new worth posting as of late, I figured I would upload this. I'm glad that I came across this record, because other than Os Mutantes I didn't think that Brazil had any sort of psychedelic rock scene in the 60's. I suppose it's understandable, considering that most of these artists recorded under General Humberto Castelo's dictatorship. Music doesn't get any more underground than this. You'd be hard pressed to find music that is more original or groundbreaking as well. Most of the artists seamlessly fuse tropicalia with fuzzed out guitars to create music that is unlike anything you've ever heard.

this is a bit odd, but may i suggest uploading the band white rabbits? they're a really catchy band and i think the people that come to this blog would enjoy their music.

This link seems to be not working

The link still does not seem to be working.

link is busted... would love to hear this.

The links gone. Any chance of you re-uping it? I'd love to hear this since I've been perusing your archives and have already found several albums that have become quick favorites.