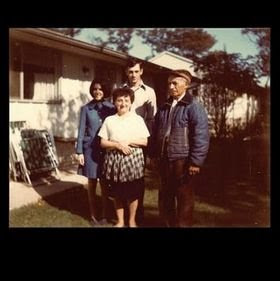 I've been addicted to this album lately, and I just downloaded their release from last year, and I'm highly enjoying that as well. The duo known as Woods decided to become a trio known as Woods Family Creeps for this release. Woods create some lo-fi, backwoodsy, and strangely melodic pop-ish tunes that get stuck in your head almost immediately. The cassette-tape hiss and high-pitched vocals give Woods a sound their own. Woods' At Rear House, released last year, has a few active links around the net, so after checking this album out, I suggest tracking that one down as well. If you're looking for a comparison, they're sound reminds me of a mix of The Ohsees and Phosphorescent albums I posted awhile ago.
.
- Dan

i found myself listening to this album nearly 3 times a day for the past week.