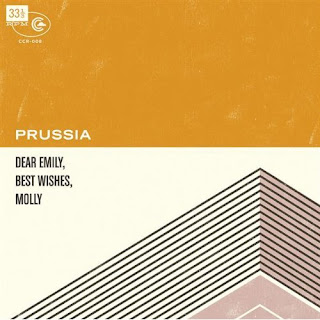 Local Detroit bands are generally associated with either trying to sound like The Stooges, The Sonics, or some mishmash of the two in order to embrace the garage rock sound the city is so deeply rooted in. Yeah, that shit is important, and hey, a lot of the bands that run with that shtick are pretty damn good (I think Dan and I could both gush over The Go for hours like hormone crazed pre-teen girls). Every once in while I would like to see some fucking variety. Prussia delivers in spades. These guys are able to look back even further and draw heavily from the likes of doo-wop and motown to bring something both raw and incredibly endearing to the table where other less talented bands could easily fail. Prussia doesn't want to be pidgeonholed (and lord knows you couldn't if you tried) but their obvious influences give the audience an immediate and familiar connection. Lets not forget either that these are skinny white kids, so the end product sounds something like Animal Collective thrown in the back of Doc Brown's Delorean and transported to 1955 where they play the enchantment under the sea dance. If you're from a record label and you're reading this, give these guys a fuck ton of money so they can put out another cool record and gain some national attention. If you're just a regular guy/gal that enjoys fantastic music, pick up a copy of this record on vinyl. Prussia's sound really shines when you hear it on wax, and besides, I think the LP is only $10 at Insound.

This is a really great album, thanks for posting it... Twas the soundtrack to my viewing of the 44th presidential election, not too fitting but totally awesome.

BTW, Prussia is on a label: Common Cloud Records

Really curious to hear this one based on description alone. Living so close to Detroit, it would be REALLY nice if a band I liked was from there.

oh, and thanks for the upload. (trying to stop being a terminal leech and actually comment and say thanks)

I saw this band live back when I lived in Toledo, OH and always drove up to Detroit for loft shows.
they've got a unique style with the heavy tympani drums.

have you heard of Child Bite?
you should really get some uploads of their work for people to hear. They are my favorite Detroit band, next to Lee Marvin Computer Arm.

thanks for this. These guys kick ass, i've been diving into their newer album hard. Appreciate it.