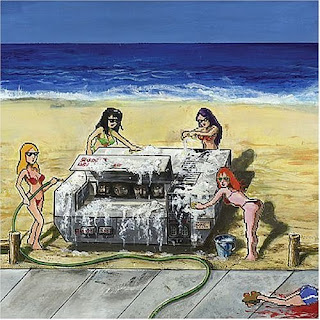 The Advantage are a cover band featuring Hella guitarist Spencer Seim. Instead of shredding, Spencer hops behind the drum kit with some pretty impressive results. When I first heard Elf Titled, I just assumed the manic drumming was the work of Zach Hill. As far as the covers here go, you won't hear any standard bar-rock fare. Instead, The Advantage focus their incredible musical chops on producing badass renditions of classic NES game themes. You're really in for a nostalgic trip with this one. The spot on Mega Man II cover will have have you screaming at your television and throwing controllers across the room . Air Man was fucking impossible to beat. I digress...
If you're a fan of old school Nintendo jams and/or pre-vocalist, pre-touring-with-super-shitty-bands-and-playing-arenas Hella, you'll dig this.

man i haven't listened to this in years. good thinking.

the advantage are awesome though i think their true s/t is a much better album. also fantastic live.

LOVE The Advantage. "Contra - Alien's Layer & Boss Music" is one of the best songs ever. It's so metal and epic. I can't get enough. And "Ducktales - Moon" brings me waaaaay back.