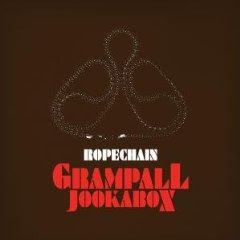 Less than 10 days into 2009 and Dan already has the jump on me. It's time to stop slacking and actually post something that won't get taken down in two hours (I did my best with Animal Collective). Ropechain is the second release from Indianapolis based Grampall Jookabox on Sufjan Stevens's Asmatic Kittie label. Since coming across it at work a month ago I've had it in and out of my stereo a dozen times. This album is tough to love, but impossible to dislike. The eerie combination of crazy sound samples, vocal manipulation (with the accompanying maniacal lyrics) , and who-gives-a-fuck-the-first-take-was-fine production makes for a strange listen. Grampall gets big bonus points for his mad scientist locked in a basement sound. Somtimes sheer ambition can really add something to an album. Ropechain is rarely triumphant in what it's trying to accomplish, but it is constantly intriguing, which makes it worthy of a download.

This is great,thanks for sharing

I was a tad bit curious about this, seemed cool, but the link is dead... Thought I should give ya a heads up...