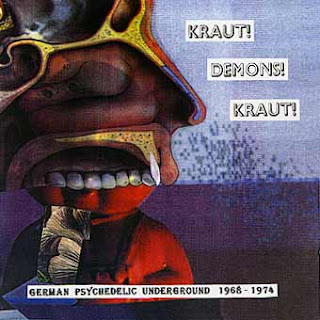 Ongakubaka updates from Kalamazoo have been sparse to say the least. Good news: I'm finally done with classes and currently unemployed so now I don't have anything better to do. I was going to post the new Big Business record, but after it leaked I gave it a listen and decided it wasn't worth the five minutes it would take me to put it up on here. Alright, maybe it isn't that bad but I had higher expectations. Maybe I should actually write something about the album I'm posting. Like many albums on my hard drive, I accidentally downloaded Kraut! Demons! Kraut! from some windowlicker on Soulseek who happened to have good taste in music, but lacked the mental capacity to figure out how to organize his files properly. I'm giving the guy a free pass because this record is so interesting and has a ton of variety. While nothing here reaches the quality of more well known acts like Can and Neu!, the comp does provide an excellent snapshot of a chapter in the history of psychedelic rock that most music fans are oblivious to. Plus you get to hear people with ridiculous accents sing about smoking weed and touching the hand of God. Can't go wrong with that.

Are you still going to do morning rave?

Yeah I'll probably do the show through the summer

hello, Ongakubaka!
Im a fan of your blog since about a year. Thanks for the great work!
I wanted to ask you if you know a band called Sabot, from the U.S., but for a long time working and living in the Czech Republic. They are a bass/drums duo (couple). I went to a show last week and it blew my mind.
Been searching for some of their records around the internet and cant find absolutely nothing.
If you know them, it would be greeaat if you could post something. If you dont, chek them out, they are great.
Thanks again for all.

this is so good. one of my favorite albums of all time. really. thanks for posting it. now, if only i could find it on vinyl...

The track that is misscalled "20 Can" on this record. Is it really from Can???? Its the song from whom Lovage (Mike Patton) sampled for one of their songs instrumentation, Kid Koala was the Dj.

Anyway, is that song really from Can and to which of their recordings does it belong?

I would be so happy if anyone could tell me.

The name of track is actually "Kama Sutra"

I don't recognize it at all and I have no idea what Can album it's from. Suppose I should have been tipped off to their inclusion on this comp by the track label, but I was listening to this one in my car so I didn't have any info in front of me.

you're in kalamazoo? i was there 8/05-6/06 at k college. had mental problems, grew a big beard and threatened to become a mountain man, but i had too many records. Keep up the good blog.

that can track is from 68 when they were called inner space. it's from the same single as "I'm hiding my nightingale" on here

Thanks man. I was looking for this. Thanks for sharing it. Cheers

Hey, great! I just stumbled into your blog and I discover my old Kraut Demons-comp. I compiled this one a long time ago and there never was a vinyl edition. But we've released 3 more rare Kraut CD-comps during the 90s called "Hungry Krauts,Daddy", "Obscured By Krauts" and "Kraut-Bloody-Rageous". The Can (Inner Space) track here is dubbed directly from the video-tape of the "Kama Sutra" movie, and was unreleased until the entire Soundtrack has been released last year. Here's good news, maybe... The series continues. But the new volumes are online-only compilations. You can download free on spurensicherung.blogspot.com : "Kraut Mask Replica" and "Tune in Turn on, Drop Kraut" Lots of unreleased Can gems spread across these volumes. Yours, The Lolly Pope.

Hi there,
Really nice job,There are many people searching about that now they will find enough sources by your tips.
Also looking forward for more tips about that