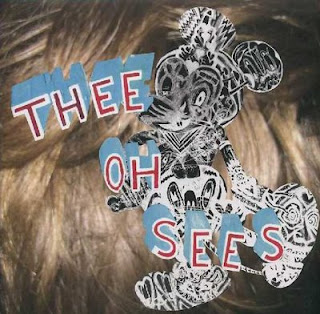 We got a request a few weeks ago for this one/I picked up this LP w/ bonus CD earlier today from a vinyl only shop here in Richmond called Deep Groove Records. I was also able to pick up a copy of Boredoms' Soul Discharge LP for a friend as well. A pretty successful day, I'd say. Anyways, Zork's Tape Bruise is an album of incredibly good demo's from John Dwyer. Many of the tracks on the LP are much louder and more creative versions of tracks found on their recently released Help LP, with a larger variety of instruments and noise than used than in the final product. Alvin of Alvin and the Chipmunks also makes a quick appearance in "Enemy Dustruct". The bonus CD contains every track they've released exclusively on vinyl. A great record in its own right. A must-own LP/CD combo from Kill Shaman Records.

im pretty jazzed about this shit right here....thanks, i was pretty confident you'd come through with this...

thanks for these. big fan of pink & brown and the coachwhips, just started getting into thee oh sees

i was just in richmond a month ago and had no idea deep groove existed. friends neglected to tell me. i did go to vinyl conflict in oregon hill and found a rad silvester anfang LP. i'll be back this weekend, though, to check out deep groove. any shows this saturday night worth checking out?

Do The Feedback said...

I count myself lucky to live in the birthplace of such a great band and have the opportunity to see them pretty often. Thanx.

This is a great comp and I bought my own copy at their show in Seattle last night.