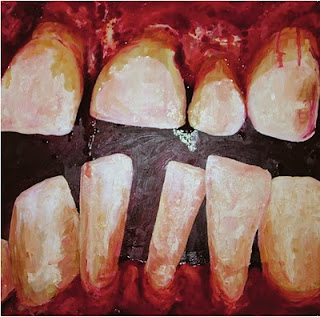 Debut 10" EP from this five-piece from Glasgow, Scotland. Although four of the five members of the band are female, this is some incredibly abrasive, ugly, and testicular music. Imagine a more obnoxious Pissed Jeans or Flipper fronted by a woman that sounds like she really needs to clear her throat. Many of you won't make it further than 30 seconds into the first track, but there will be plenty of you, like me, who enjoy every second of it. So far, they've shared a stage with bands such as Part Chimp, HEALTH, Deerhoof, and Lovvers, and I've got a feeling it won't be too long until they're able to make it over to the States on a tour of their own. Unfortunately, this EP is only available in the UK. Get it here: Norman Records.
http://www.divorcetheband.blogspot.com/
- Dan
Download Divorce

for the record, the drummer for divorce is a man.

apologies, misread your post.
love the blog, these guys are amazing also check out the glasgow band ultimate thrush :
http://winningspermparty.com/releases/wsp014-ultimateThrush.zip
similar kind of no wave vibe going on.

yeah, they mentioned they've got a split release coming up this year with Ultimate Thrush.