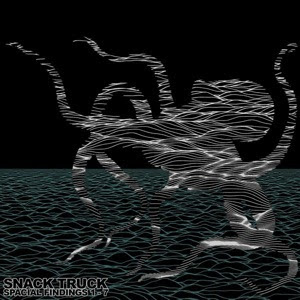 I first came across Snack Truck's 2004 release Harpoon years back while living in Michigan. Solid release, but it was borderline screamo on a few tracks, and I eventually forgot about them. I happened to move to their hometown of Richmond, VA about a year and a half ago, and I caught their set when they opened for Monotonix last October. I was incredibly pleased by their new sound. Dueling drummers, calculated guitar noodling, epic progressions, and, most importantly, no more screaming. This is some highly entertaining instrumental goodness for fans of Battles, Don Caballero, or Hella. Spacial Findings 1-7 contains 4 tracks from a previously released 7" plus 3 previously unreleased tracks from the same recording session. It's a quick listen and will definitely have you looking forward to their next release. Quite easily one of the best bands from RVA. Below is a video for the track "Blake Jones in Space". Buy it here.
- Dan
Download Spacial Findings

thanks so much for this! i had the misfortune of booking an Ultra Dolphins/LOrder of the Dying Orchid show years ago that was shut down during the first ultra dolphins song. but those dudes sold me a badass Snack Truck 12". great band. thanks again.

actually jeff blinder booked that show, i lived at the house. fuuuck so long ago, sorry jeff.

good call man..i was just about to post this...now i dont have to..cheers.

Hey i am really glad to found such a wonderful blog..thank you for sharing such kind of information..your article are very interesting.keep posting.

Thanks for sharing, I'm really into this.

Thanks very much for such a useful piece of information. This reminded me of the last time when I shifted from London to Manchester in a hurry.I booked the moving company and seriously moving company helped me all along and made it an easy task.

this is one of the great blogpot that i have ever seen.

Nice post a bout a great bend, enjoyed the read thank you have a bless day.
Dallas movers