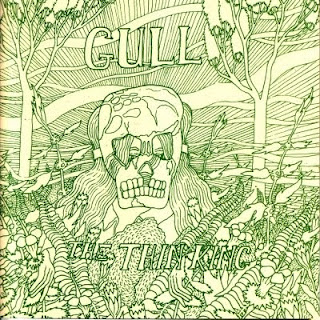 First off, if you don't know of this guy yet, I'm likely about to make your day. GULL is the solo effort of Snack Truck/Ultra Dolphins member Nathaniel Rappole. GULL has earned a strong little following here in RVA as a result of playing riverside, as well as outside of record shops/art galleries. Using his left hand for guitar, right hand for drumming, and vocal rambling through a telephone receiver in his skull mask, Rappole managed to create some pretty self-sufficient recordings outside of his live performances, BUT his live performance is largely what makes this so enjoyable and I advise watching the video below before listening. The Thin King 7" contains four tracks that display a number of influences, and has me looking forward to more material from the man. I also included his The Bedouin Lover demo in the download, which I came across at the radio station. Don't know much more about it, but it's got some pretty cool moments. Pick up the 7" at Molsook Records or Insound.
- Dan
Download The Thin King 7" + The Bedouin Lover Demo

Wow. You did just make my day.

Thanks a lot, just downloaded, will check out soon!

I suggest to check out VIRUS (myspace.com/virusvive), an italian noise punk band (similar to the Hospitals maybe more "hardcore") which uses the same formula of a guy playing guitar and drums at the same time. They also have a singer who blabbers in fake english. They're friends of mine and have a 7" split with my ex band out now.
Hey, and thanks for all the music you share, this is a great blog!

holy shit.
really.
you underestimated the period of time that this did indeed cause to be "made".

you did make my day really, I did not know nor heard a thing about this guy and in my opinion this guy is really awesome, thank you so much for this post!
best regards!

I just shrieked of joy at finding your blog again. I messed up my computer over a year ago and lost the bookmark. Today I saw this movie with Gull in it and when I found out he was from Richmond I immediately remembered this Richmond, VA blog I once used to visit. Kudos and cheers from Mexico.

any chance of seeing this up again? cheers in advance!

Hello, Ongakubaka.
I've known this guy for a while but been hearing it only in youtube videos.
Is there any chance of a reupload of this two gems. Please...
Thanks for your blog, it's great. Here is where i found The Oh Sees for the first time back in 2009. Thanks for that!
Cheers!