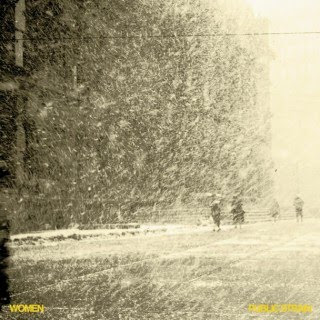 I only gave this one a quick listen because I wanted to get it up on the blog ASAP. This is the followup to Women's self-titled debut, an Ongakubaka favorite from back in 2008. My initial impression: this shit is dissident and bleak as FUCK. As an album, it flows a lot better than their previous work. Tracks move from one to the next in a more logical progression, which ditches the more thrown together (and at times schizophrenic) feel of the first record. I'll have to give it a few more spins, but right now I'm sold. Even if it lacks a big home run track like Black Rice, I can see Public Strain ending up on a lot of "best of" lists at the end of the year. Download this and then pick up the LP when it drops next week. Women is your new favorite band.

This doesn't lack anything! Black Rice is a distant memory in the wake of China Steps and Eyesore. EYESORE! such an amazing progression for a track to take. How hard can your heart burst? And how many times in one album?

a grower. gets better with every listen for sure. incredible stuff.

I found this album to be quite addicting. Untogether is eerily reminiscent of sonic youth. I am having a hard time comparing it to their self titled release.@steve I do agree with you that there is more consistency in terms of an album albeit Eyesore feels slightly out of place...but all for the better! Eyesore is probably one of the best damn songs i have heard all year! I also really love Locust Valley.

Buy the vinyl. They'll send you a single with two previously unreleased b-sides.