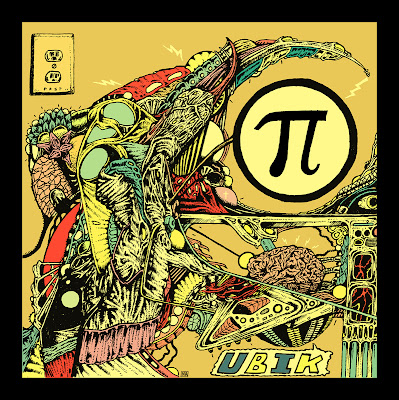 Last year I was fortunate enough to stumble upon Pi's debut demo You In Colour while Dan and I were at Austin Psych Fest. The demo was solid, and while the band played it relatively safe with a familiar blues/garage rock foundation, the songs were undeniably great. Pi has remained busy, releasing an EP back in September and now Ubik, their latest EP at the beginning of 2013. Ubik is a huge step forward for the band, showcasing their musicianship and a willingness to branch out and experiment while still writing songs that fit comfortably into their oeuvre. The thunderous percussion of the opening track "Unfortunate Son" perfectly ushers in the band's evolved sound. Fittingly, the closing track, "The Fool" is a reworked version of one of the group's older songs and it trumps the original in every way. Ubik is available on Bandcamp as a pay-what-you-want download.

Very impressive EP, there's a typo in the comments : the first track is "Unfortunate Son" not "The Fool".